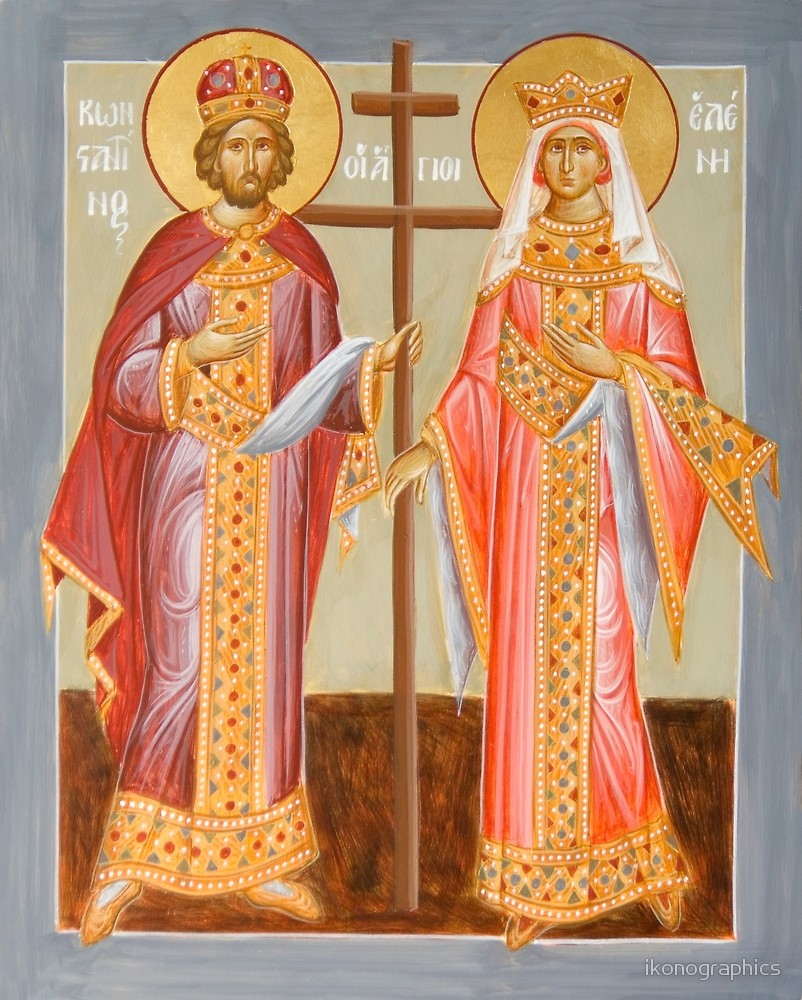 About Saints Constantine and Helen

This great and renowned sovereign of the Christians was the son of Constantius Chlorus (the ruler of the westernmost parts of the Roman empire), and of the blessed Helen. He was born in 272, in Naissus of Dardania, a city on the Hellespont. In 306, when his father died, he was proclaimed successor to his throne. In 312, on learning that Maxentius and Maximinus had joined forces against him, he marched into Italy, where, while at the head of his troops, he saw in the sky after midday, beneath the sun, a radiant pillar in the form of a cross with the words: "By this shalt thou conquer." The following night, our Lord Jesus Christ appeared to him in a dream and declared to him the power of the Cross and its significance. When he arose in the morning, he immediately ordered that a labarum be made (which is a banner or standard of victory over the enemy) in the form of a cross, and he inscribed on it the Name of Jesus Christ. On the 28th Of October, he attacked and mightily conquered Maxentius, who drowned in the Tiber River while fleeing. The following day, Constantine entered Rome in triumph and was proclaimed Emperor of the West by the Senate, while Licinius, his brother-in-law, ruled in the East. But out of malice, Licinius later persecuted the Christians. Constantine fought him once and again, and utterly destroyed him in 324, and in this manner he became monarch over the West and the East. Under him and because of him all the persecutions against the Church ceased. Christianity triumphed and idolatry was overthrown. In 325 he gathered the First Ecumenical Council in Nicaea, which he himself personally addressed. In 324, in the ancient city of Byzantium, he laid the foundations of the new capital of his realm, and solemnly inaugurated it on May 11, 330, naming it after himself, Constantinople. Falling ill near Nicomedia, he requested to receive divine Baptism, and when he had been deemed worthy of the Holy Mysteries, he reposed in 337, on May 21 or 22, the day of Pentecost, having lived sixty-five years, of which he ruled for thirty-one years. His remains were transferred to Constantinople and were deposed in the Church of the Holy Apostles, which had been built by him.

As for his holy mother Helen, after her son had made the Faith of Christ triumphant throughout the Roman Empire, she undertook a journey to Jerusalem and found the Holy Cross on which our Lord was crucified (see Sept. 13 and 14). After this, Saint Helen, in her zeal to glorify Christ, built churches in Jerusalem at the sites of the Crucifixion and Resurrection, in Bethlehem at the cave where our Savior was born, another on the Mount of Olives whence He ascended into Heaven, and many others throughout the Holy Land, Cyprus, and elsewhere. She was proclaimed Augusta, her image was stamped upon golden coins, and two cities were named Helenopolis after her in Bithynia and in Palestine. Having been thus glorified for her piety, she departed to the Lord being about eighty years of age, according to some in the year 330, according to others, in 336.

Apolytikion in Plagal of the Fourth Tone

He beheld the image of Your Cross in the Heavens and, as Paul, he too did not receive the call from men. Your Apostle among Kings placed the care of the Royal City in Your hands. Through the intercessions of the Theotokos, O only Loving Lord, keep it ever in peace.

Kontakion in the Third Tone

Today, Constantine with his mother Helen present the Cross, the most precious wood. It shames unbelievers. It is a weapon of faithful kings against their adversaries. A great sign has come forth for us which is awesome in battle.

Please enter a search term to begin your search.